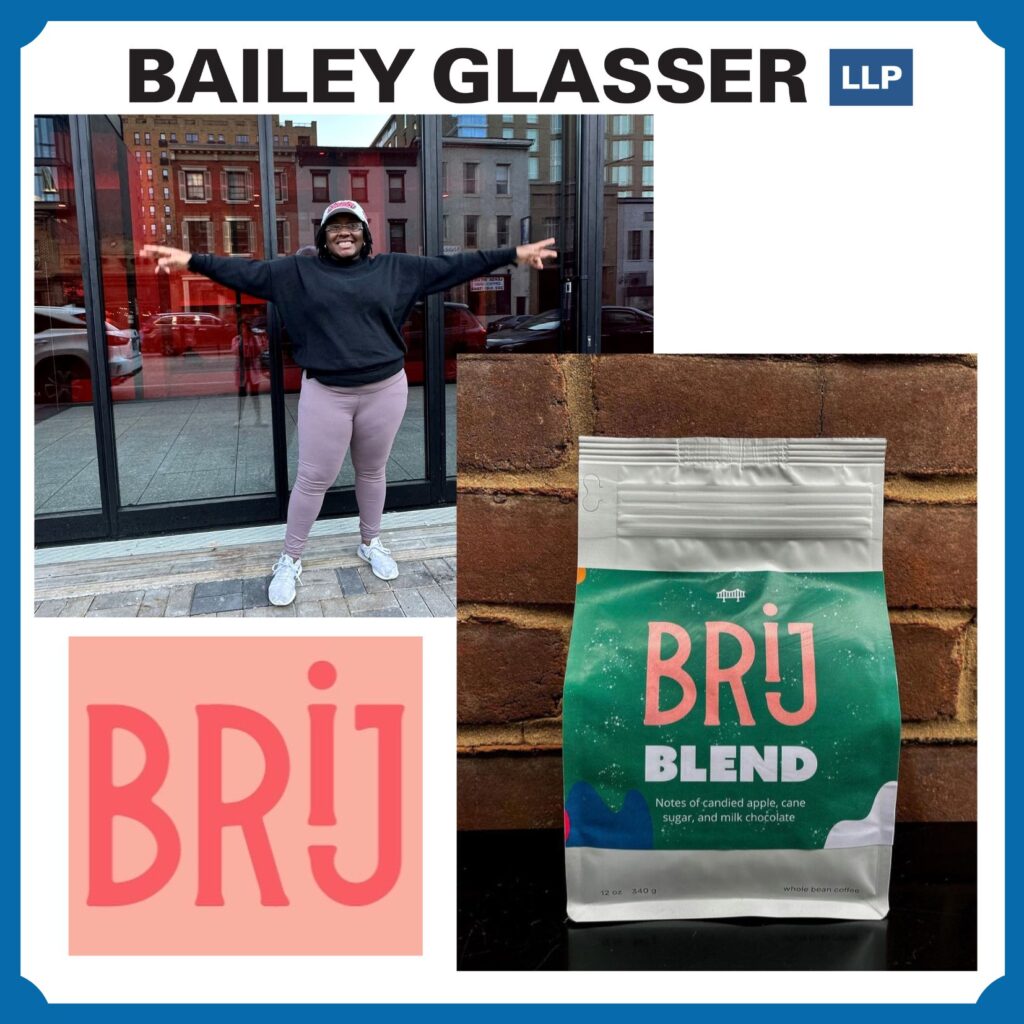 Congratulations to DC entrepreneur Skyler Kelley for securing lease rights to open a new Brij Coffeehouse kiosk at the Walter E. Washington Convention Center in Washington, D.C. Drawing upon her lived experience as an unhoused single mother, Skyler’s vision includes reinvesting a portion of Brij’s earnings in the community through nonprofits that help neighbors in need. Skyler is passionate about eradicating homelessness and bridging gaps among D.C.’s diverse community. Bailey Glasser attorneys Kurt Gleeson, Michael Murphy, Lorren Patterson, and Greg Payton were delighted to work with Skyler on a pro bono basis to secure the lease and handle several corporate organizational matters for her company. 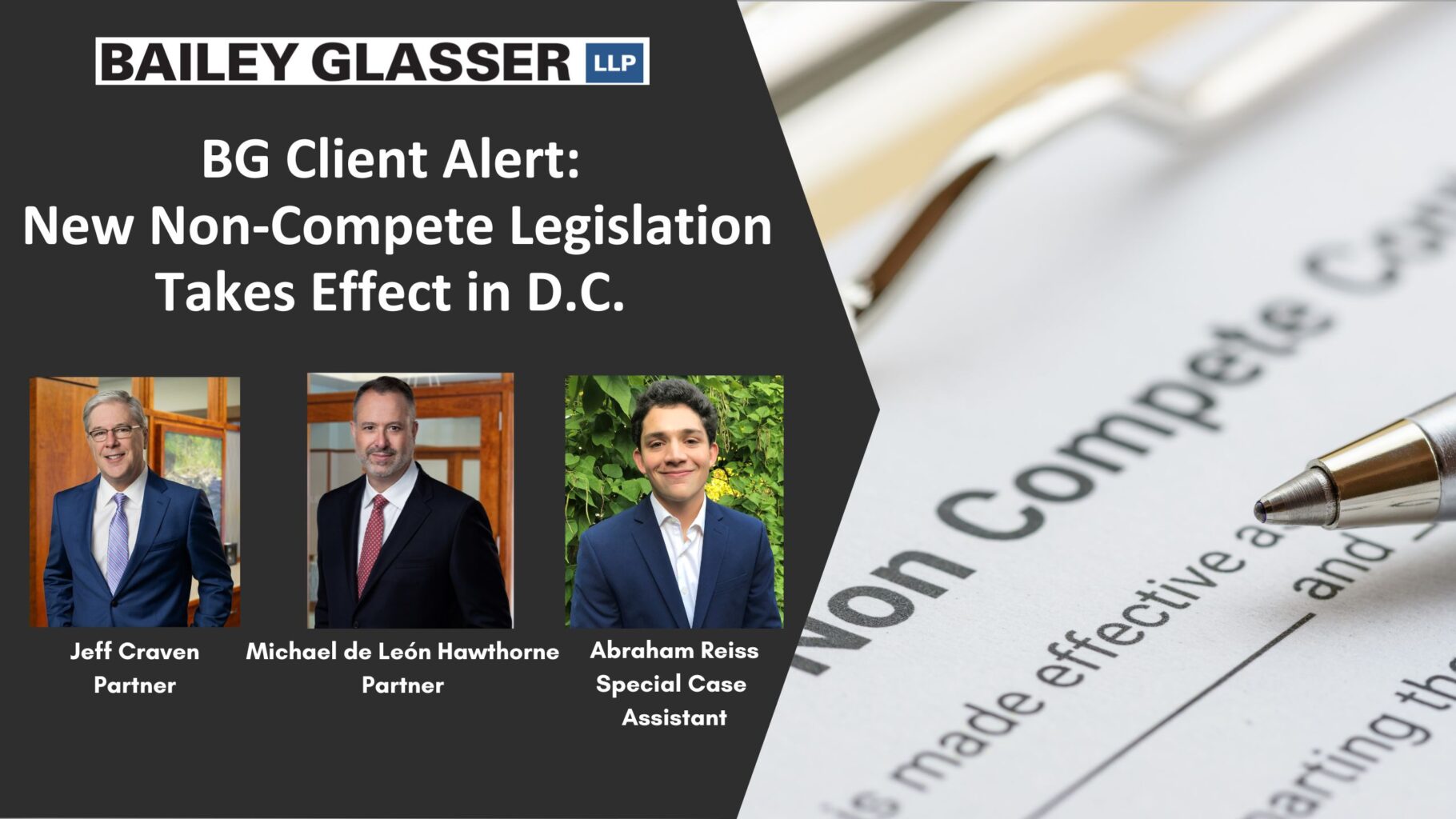 Washington, D.C.’s new non-compete law, the “Non-Compete Clarification Amendment Act of 2022” (the “Amended Act”) went into effect last month. As of October 1, 2022, employers operating in the District of Columbia are prohibited from using most non-compete provisions, with key exceptions. The Amendment Act is not retroactive: non-competition agreements predating October 1, 2022, are not affected, although employers may still want to review such non-compete provisions with their legal counsel.

The new legislation represents a toned-down version of the “Ban on Non-Compete Agreements Amendment Act of 2020,” an outright ban on non-competes covering nearly all D.C. employees, passed by the city council in December 2020. The 2020 ban, which became law in January 2021, would have constituted one of the most employee-friendly non-compete laws in the country. However, significant backlash from D.C. business interests effectively pressured the city council to delay its implementation and draft a more modest version of the law. On June 12, 2022, the council passed the Amended Act, which includes important employer-friendly exemptions that had been requested by the D.C. business lobby.

Employers may use non-compete restrictions for their “highly compensated” employees, defined as those whose total annual compensation, including wages or salaries as well as bonuses, commissions, vested stock, and overtime pay, exceeds $150,000. For medical specialists, the minimum qualifying annual compensation is $250,000. However, non-competes for these employees must clearly stipulate any geographic limitations and the length of time covered after separation is capped at 1 year (2 years for medical specialists). “Broadcast employees” do not qualify as highly compensated, regardless of what they earn and are defined by the Amended Act as any “on or off-air creator (such as an anchor, disc jockey, editor, producer, program host, reporter, or writer)” working at any D.C. station or network that provides broadcast services. Minimum qualifying annual compensation values will be adjusted based on the local Consumer Price Index beginning on January 1, 2024.

The new law also includes an anti-moonlighting provision allowing employers to restrict employees who also work simultaneous, separate employment. Employers may use non-compete provisions for such simultaneous employment when they “reasonably believe” that their employee’s second job would result in a conflict of interest, disclosure of confidential information, or the breach of industry rules or local or federal laws and regulations. The legislation also permits non-competition provisions in the context of long-term incentive agreements in which employers award bonuses, equity, and/or stock as performance-based rewards.

In some professions, governing associations already bar the use of non-competes. For instance, the ethics rules of the American Bar Association (ABA) prohibit non-competition clauses in agreements among attorneys. 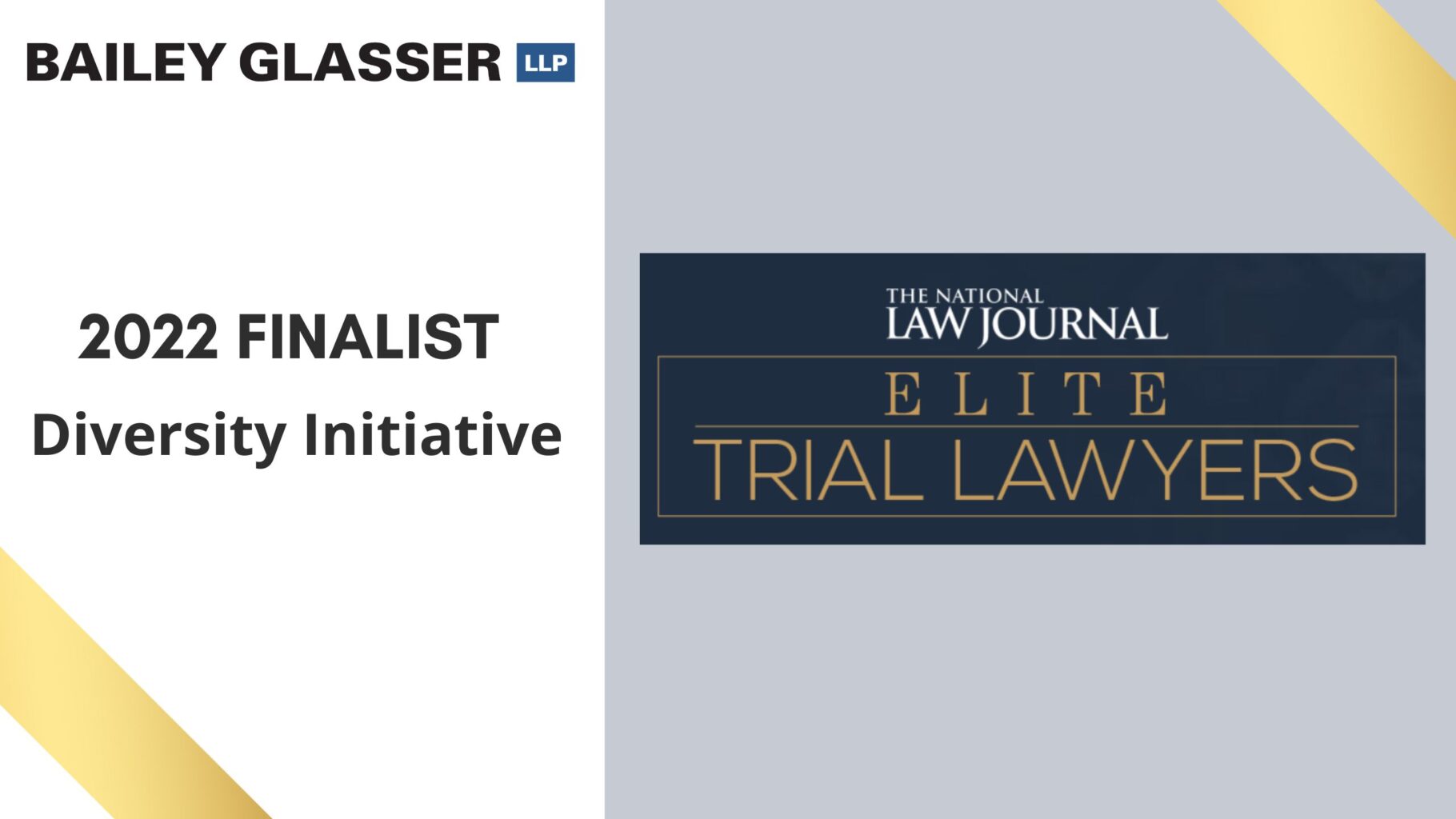 Bailey Glasser was a National Law Journal Elite Trial Lawyers 2022 Diversity Initiative finalist, and we were honored to have been selected. Bailey Glasser is deeply committed to the continued success of the diverse attorneys and staff at our firm, as well as to supporting the success of diverse attorneys across the profession. We also know there is more work to be done. We are proud to be one of only 26 law firms nationwide to achieve the first ever Midsize Mansfield Rule Certification from the Diversity Lab, and we are a law firm member of the Leadership Council on Legal Diversity. 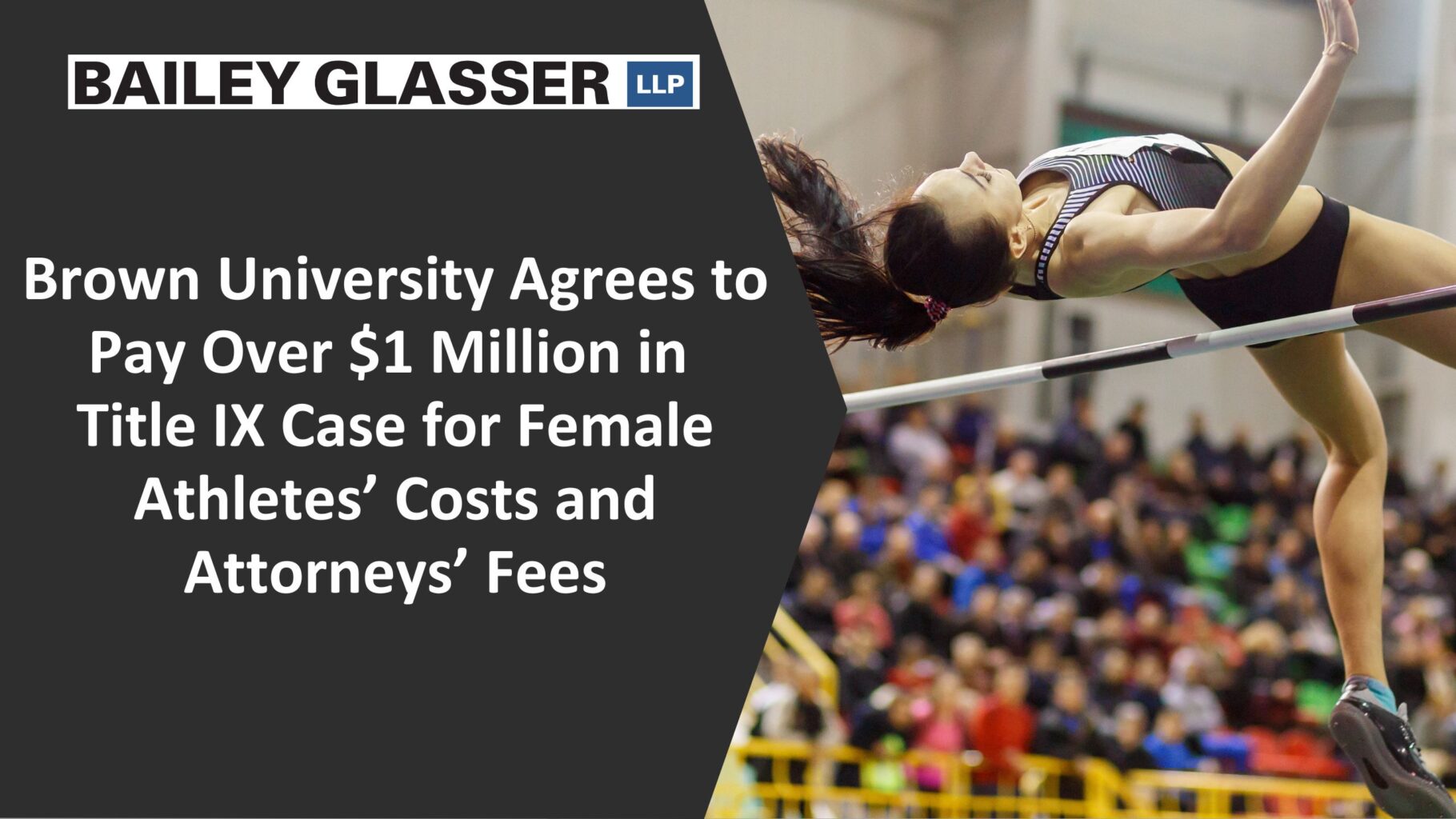 U.S. District Court Chief Judge John McConnell, Jr., approved a stipulated order in Cohen v. Brown University, the landmark Title IX case, requiring Brown University to pay $1,135,000 for the attorneys’ fees and $40,000 for the litigation expenses incurred by the class of women student-athletes who challenged the school’s elimination of women’s teams from its varsity intercollegiate athletics program in June 2020.

“This order should send a message to schools nationwide,” said partner Arthur Bryant of Bailey & Glasser, LLP, class counsel for the women. “Title IX is the law. It prohibits sex discrimination. If schools violate Title IX, they will pay. If schools violate Title IX, refuse to admit it, and fight in the courts, they will pay more. And they’ll still have to comply with the law.”

Class counsel Lynette Labinger, cooperating counsel for the ACLU Foundation of Rhode Island, said, “Countless women locally and nationally have benefitted from the efforts of the women at Brown who have championed this case over three decades through to its current conclusion. We hope that this substantial award, coming after the restoration of two of the women’s teams and the obligation to cut no more, will send a message to all colleges and universities in Rhode Island and elsewhere to carefully examine their athletic programs, renew their commitment to ensure that their women athletes are being treated fairly and equitably, and to recognize that decisions to cut programs to save money may prove more costly than the projected savings themselves.”

In 1992, women student-athletes successfully sued Brown for denying them athletic opportunities provided to Brown’s men, resulting in several precedent-setting decisions that held the school accountable for violating Title IX by depriving women of equal opportunities to participate, and a 1998 consent decree mandating compliance with that law. In 2020, the plaintiff class returned to court, charging that the elimination of five women’s teams violated the 1998 consent decree.

We are pleased to announce that we have been listed by U.S. News & World Report’s 2023 Best Law Firms in America on both national and regional tiers.

The U.S. News – Best Lawyers® “Best Law Firms” rankings are based on an evaluation process that includes client and lawyer evaluations, peer reviews from other leading attorneys, and review of additional information provided by law firms as part of the formal submission process. The 2023 rankings incorporate more than 12.2 million evaluations of more than 115,000 individual leading lawyers from more than 22,000 firms.

According to Best Law Firms: “Achieving a tiered ranking in U.S. News – Best Lawyers® “Best Law Firms” signals a unique combination of quality law practice and breadth of legal expertise. Ranked ﬁrms, presented in three tiers, are recognized on a national and regional-based scale. Firms that received a tier designation reﬂect the highest level of respect a ﬁrm can earn among other leading lawyers and clients from the same communities and practice areas.”

A complete look at BG’s 2023 rankings can be found here. 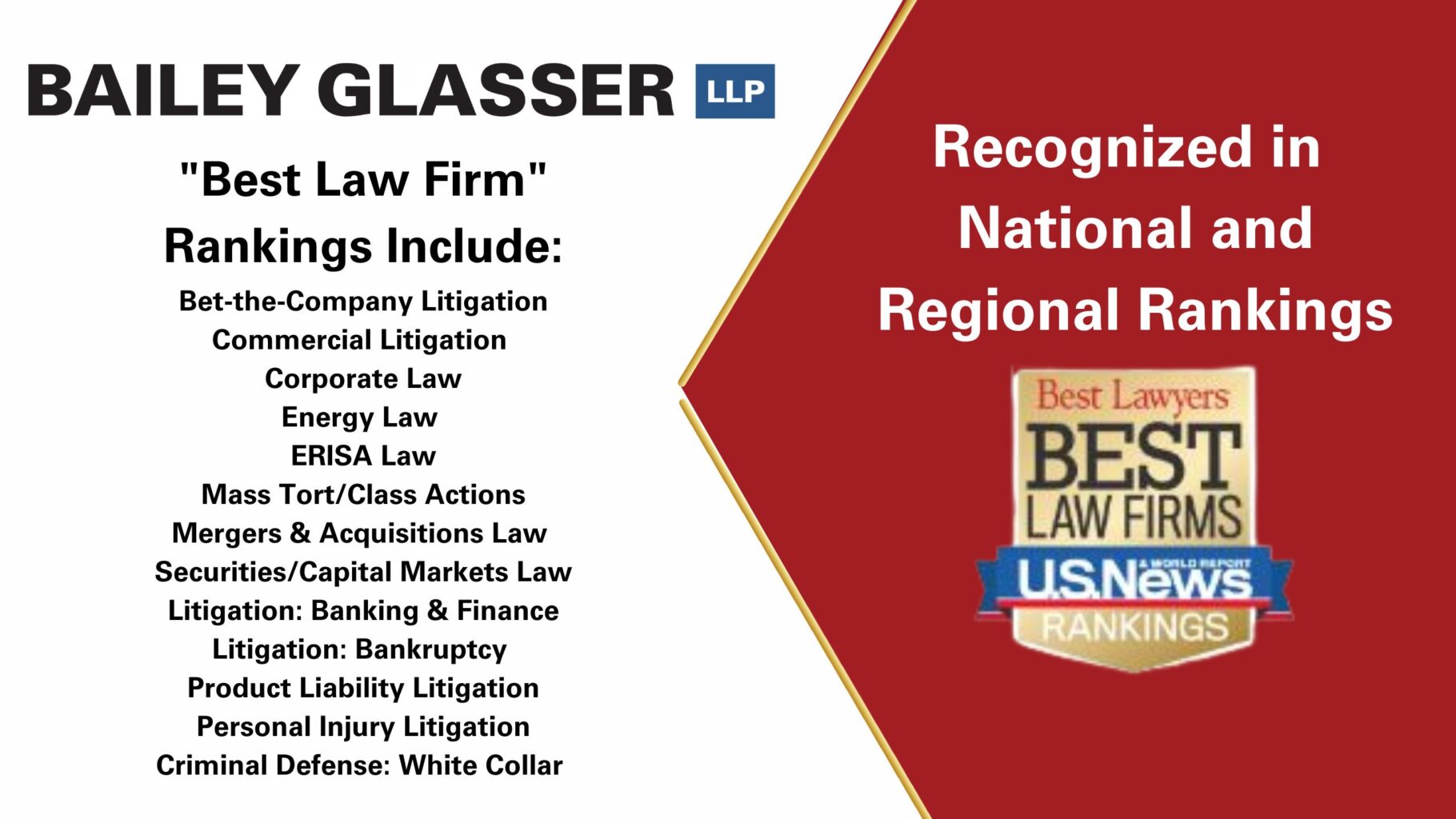 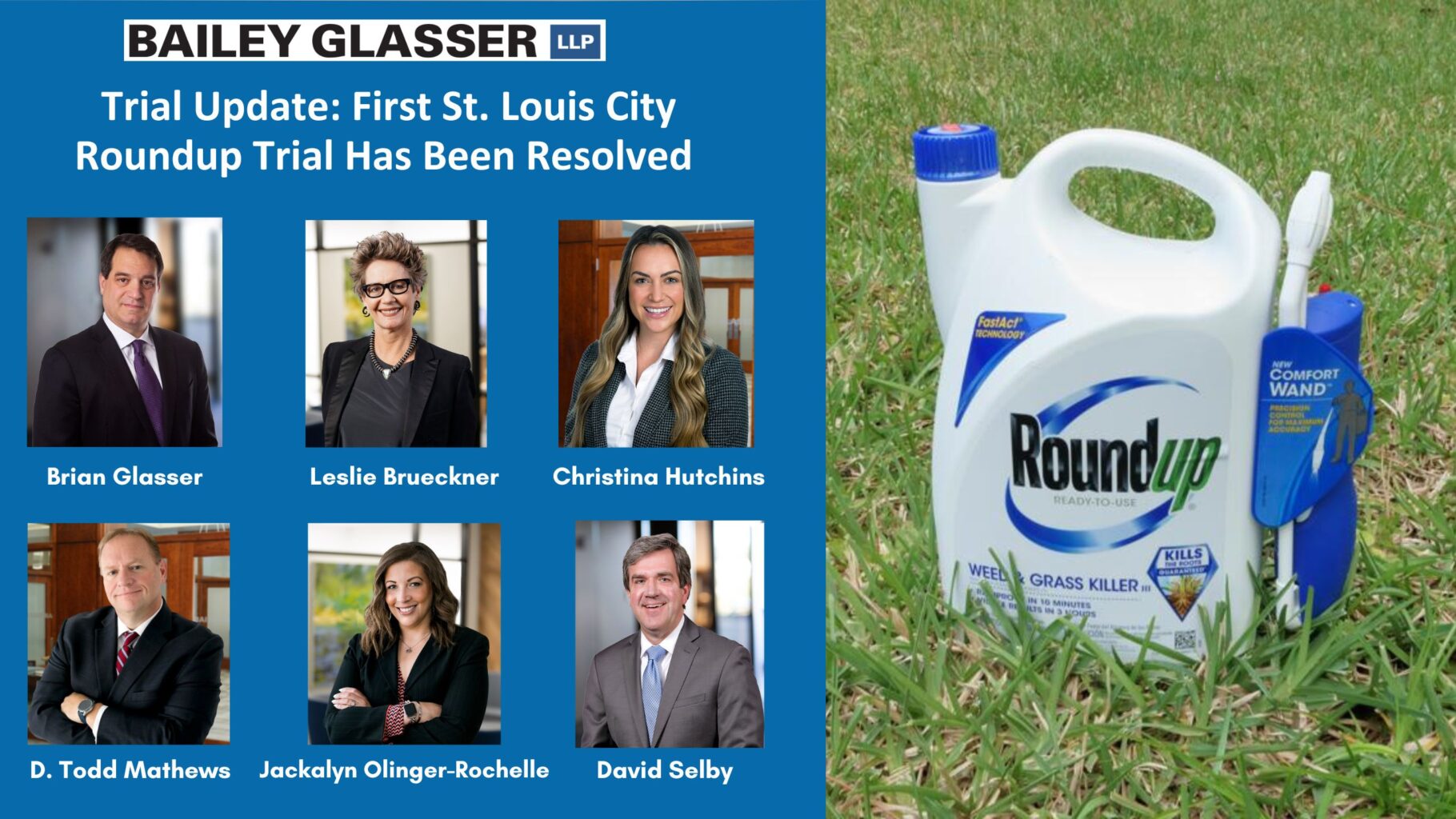 Bailey Glasser’s trial team of Brian Glasser, David Selby, Jackie Olinger-Rochelle, Christina Hutchins, Leslie Brueckner, and Todd Mathews, along with David Wool of Wool Trial Law and Joan Lockwood and Tom Neill of Gray Ritter and Graham, began the presentation of evidence in the first St. Louis City Roundup Trial on Tuesday. By the third day of trial, the case resolved. Brian Glasser said, “We are very happy to have brought this matter to a successful resolution for our client Nathaniel Evans and his family.” 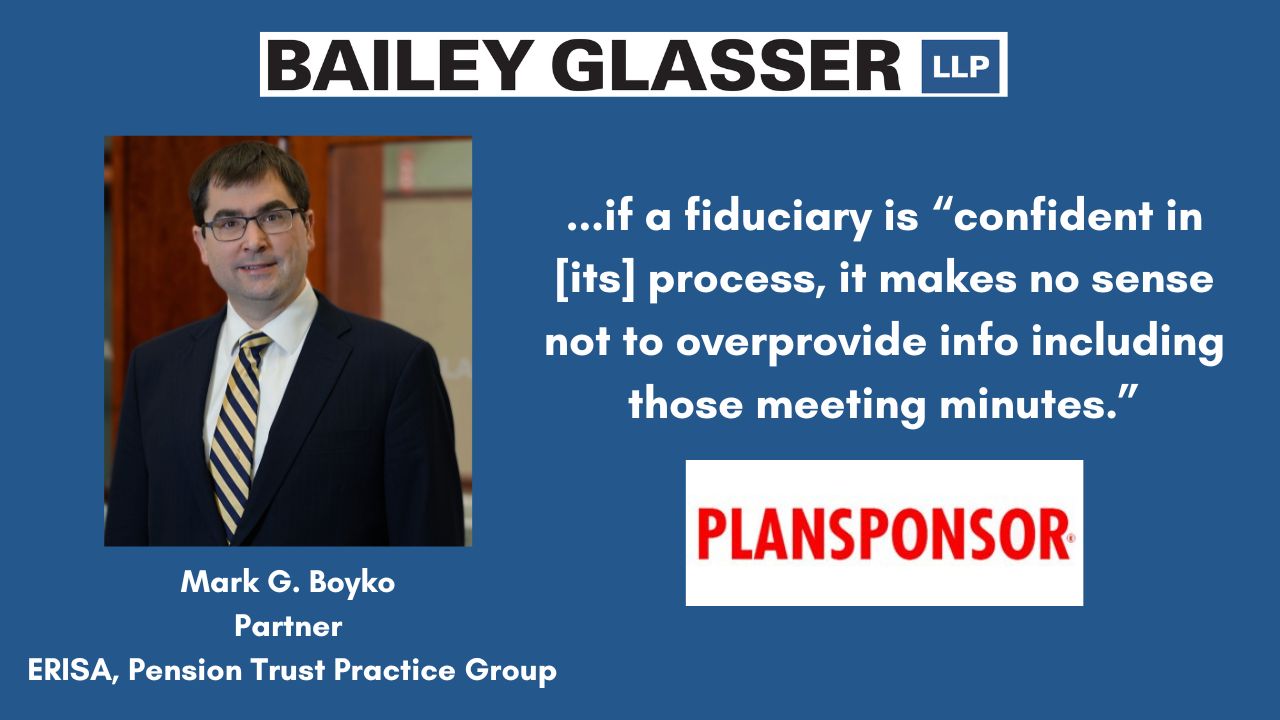 BG partner and ERISA litigator Mark Boyko was recently quoted in a PlanSponsor article discussing ERISA pleading standards and employee rights, including the right of plan participants to request certain key documents about their retirement plans and can help evaluate whether litigation is necessary. Mark was quoted saying if a fiduciary is “confident in [its] process, it makes no sense not to overprovide info including those meeting minutes.” Check out the full article here.

Bailey Glasser tenaciously represents clients that include employees, former employees, retirees, and trust beneficiaries, as well as businesses and other professionals victimized by fraud, investment mismanagement, hidden and undisclosed fees, and illegal benefit cutbacks in a number of these settlements. We have a long history of representing clients harmed by hidden or excessive fees, or imprudent investments, in their 401(k) plans.

Congratulations and well done to our own marketing maestro Justin Mai who ran the London Marathon on behalf of Hospice UK! He’s on a quest to run all six of the world’s major marathons. Next on his list: the Tokyo Marathon in March 2023, thereby bringing his global marathon tally to five, including his races in London, Berlin, New York, and Chicago. Justin raised several thousand dollars on behalf of Hospice UK and ran his marathon in three hours and fifteen minutes. Bravo! 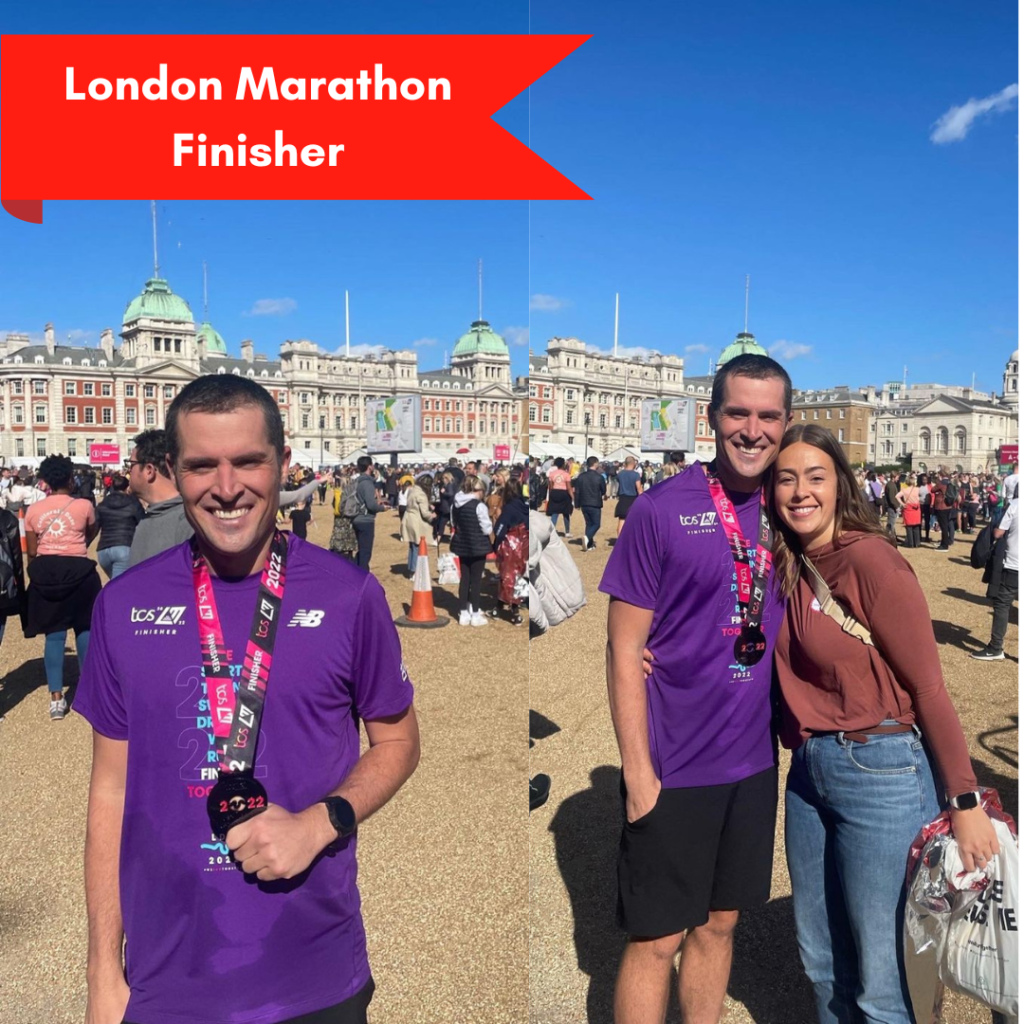 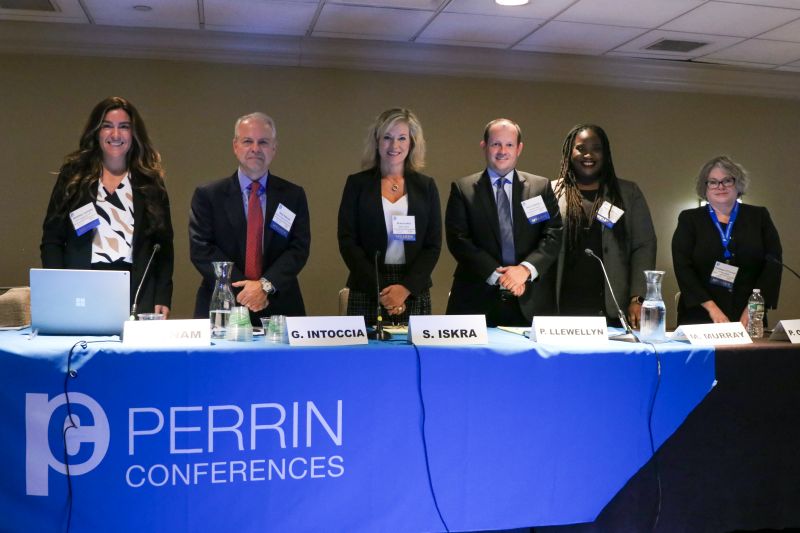 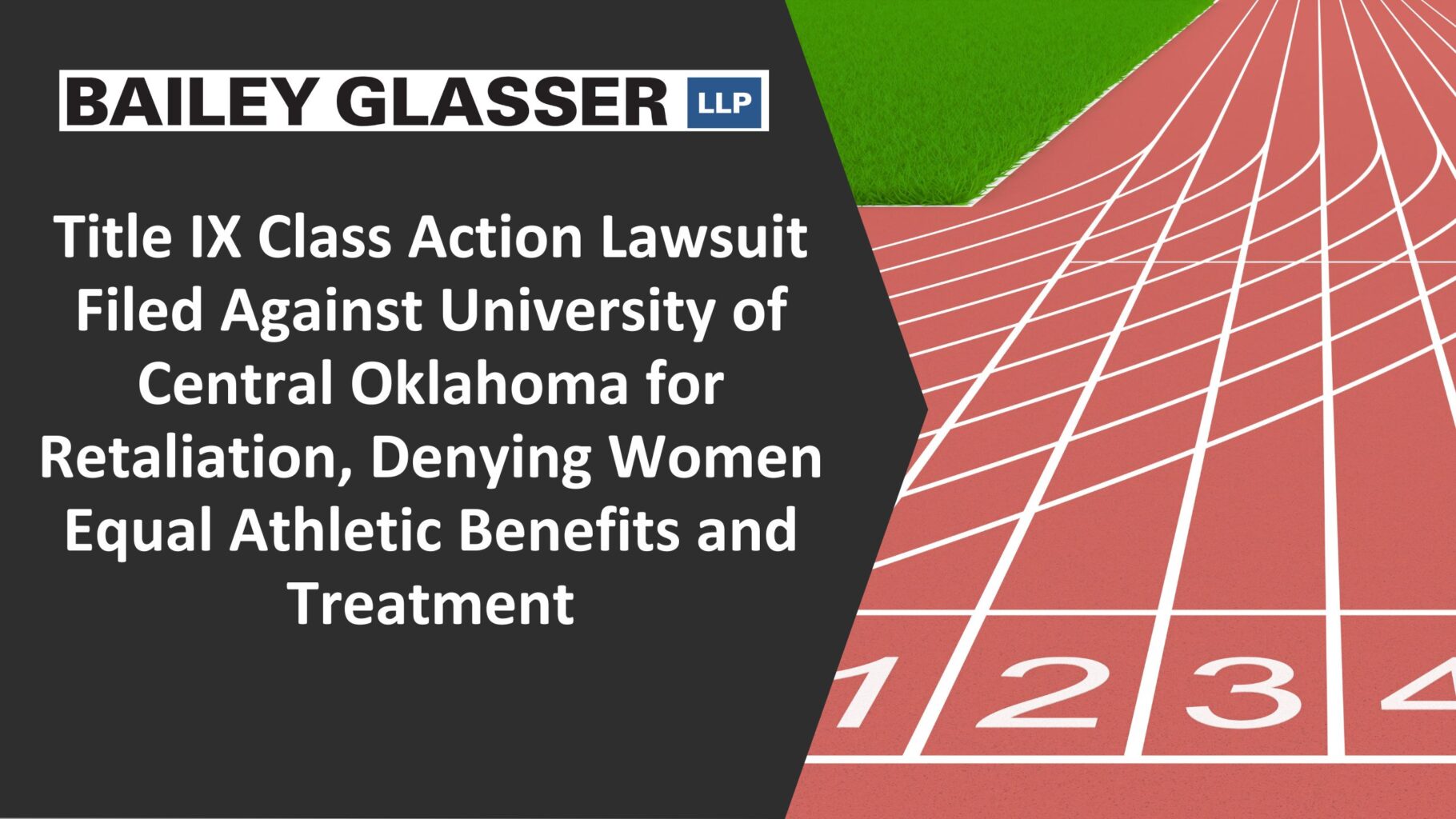 Varsity women athletes at the University of Central Oklahoma (UCO) filed a class sex discrimination lawsuit against the school today for violating Title IX of the Education Amendments of 1972 by treating its female student-athletes much worse than its male student-athletes and retaliating against them for seeking equal treatment. Title IX, a federal civil rights law, prohibits sex discrimination at UCO and all educational institutions that receive federal funds.

The female student-athletes who filed the suit are members of the women’s cross country, indoor track & field, and outdoor track & field teams at UCO, which—unlike any men’s teams—are provided no locker room, no competitive facility, and required to practice at a local middle school. When they complained about the unequal treatment they and other women athletes received, UCO fired their head coach.

Bailey & Glasser, LLP is a national full-service law firm which has, for nearly twenty-five years, been handling our clients' most challenging and consequential legal issues. Our lawyers are creative, tenacious, and collaborative. We love the work we do, and we fight for our clients. As one firm client interviewed by Chambers & Partners described us: "[t]he firm has the expertise to handle any situation and it absolutely makes you feel like you are its only client."